Book Summary: “The No Complaining Rule” by Jon Gordon 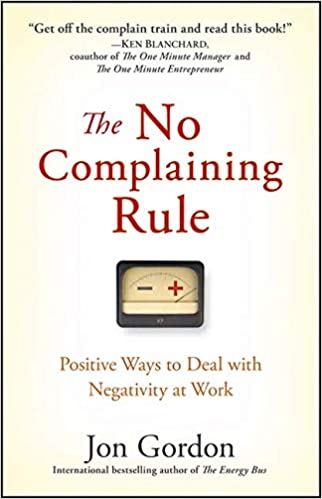 Subtitled “Positive Ways to Deal with Negativity at Work,” this book is written by the author of another popular parable-based book entitled The Energy Bus.

The No Complaining Rule is based on the premise that, when it comes to building a positive work environment, there are much more subtle and far more dangerous problems than “jerks” (these are people who are easily identified and should be dealt with quickly). The far more dangerous employees are those whose negativity is less obvious…growing and spreading largely unnoticed.

Complaining is a common form of this negativity and comes from people that the author terms “energy vampires” who spread negativity, adversely affecting morale and job performance. However, the author’s goals for this book are not to eliminate all complaining, merely mindless, chronic complaining and to turn justified complaints into positive solutions. The outcome would be to leverage the positive effects of being positive and minimize the harmful effects of being negative.

Poor communication and lack of information, common problems in business, sow a ripe field for negativity. And where there is a void, negativity will typically fill it. It’s human nature to worry, assume the worst and act accordingly. Thus negativity and complaining frequently result. The author quotes some research regarding the cost and impact of negativity:

Complaining is easy to do and often makes us feel better. Many psychologists even say that it is healthy to vent – a common form of complaining – but they’re wrong! Complaining is often merely an outlet for negative thoughts and attitudes…destructive to ourselves and annoying to those around us. Football coach Lou Holtz captured it simply when he said, “Don’t complain. Eighty percent of the people you complain to don’t care and 20 percent are glad you have problems.”

The book states that the two main reasons people complain are 1) because they are fearful and helpless and 2) because it has become a habit. But, as we know, changing habits isn’t easy. And regarding changing bad habits, someone once said that “What we need the most we resist the most.” In this parable, to decrease negativity and help diminish the harmful effects of complaining, the company implemented a “no complaining rule” whereby employees were not allowed to mindlessly complain to their coworkers. If they had a problem or complaint, they were encouraged to take the issue to their manager or someone in a position to address it. However, as a requirement of the process, the employee also had to share one or two possible solutions to their complaint. Thus, when someone did have a complaint, the company looked to use it to their advantage, as a catalyst for positive change and not merely as a release of negative energy.

Gordon writes that “Positive energy flows from the top down in most organizations, and the best way to deal with negativity is to create a positive culture where it can’t breed, grow and survive. Otherwise you spend all your time fighting negativity rather than cultivating a positive culture.” Need something to do instead of complain? Gordon offers some alternatives such as practicing gratitude, praising others, focusing on success, and letting go of what you don’t have the power to change.

Abraham Lincoln once said, “A man is about as happy as he chooses to be“…and drastically reducing mindless complaining can have a tremendously positive impact on your happiness, your morale and your job performance. So give it a try: forbid yourself from negativity and mindless complaining for a whole day and see how you do. Then share the exercise with your family, friends and colleagues.

1. Make Them Aware
Most complainers are unaware that they are chronic complainers. Better to point it out than tolerate it.

2. Become a Model
Give up complaining and set a positive example.

3. Require Complaints to be Stated as Specific Requests
Begin by establishing a boundary that you will no longer tolerate complaining and remind them when they start down that path.

4. Clearly Communicate that You Do Not Do Well with Complainers
Shift the conversation by asking what is going well.

5. Determine What is Really Bothering Them
Complaints and negative comments are usually a symptom. Ask them what the real problem is.