Book Summary: “The Knight in Rusty Armor” by Robert Fisher 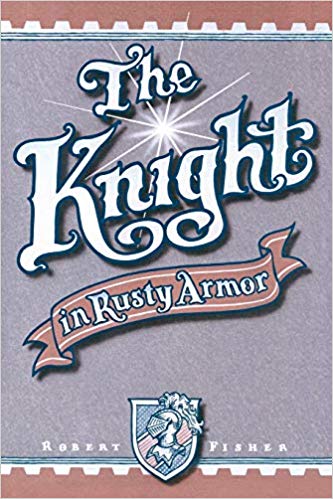 The book, written 30 years ago, includes a Forward which sums it up nicely: This is a lighthearted tale of a desperate knight in search of his true self. His journey reflects our own – filled with hope and despair, belief and disillusionment, laughter and tears. Anyone who has ever struggled with the meaning of life and love will discover profound wisdom and truth as this delightful fantasy unfolds. “The Knight” is an experience that will expand your mind, touch your heart, and nourish your soul.

This book was recommended to me by a fellow business coach who frequently utilizes it when working with his clients. It is a short read, but I recommend that you not read it too quickly, as you might miss some of the superb lessons and insights that are packed into it.

Here is a summary of the story, including some of its key points and lessons (from my perspective):

Although he thought of himself as a good, kind, and loving man (e.g., he fought foes who were bad, mean and hateful; he slew dragons; and he rescued fair damsels in distress), he wanted to be the number one knight in the kingdom and so he was never satisfied. Unfortunately, he neglected his wife and son because he was either away on a crusade or preoccupied with his knight business when he was home.

He had become so enamored with his armor that he wore it constantly around their castle (even to dinner and to bed) and it began to become his sole identity.

The knight was faced with a dilemma when his wife threatened to take their son and leave if he wouldn’t take off his armor (so she could see who he really was). Not wanting to lose his family, he went to remove his helmet but it didn’t budge. When the local blacksmith couldn’t remove it either, the knight knew he had to search for help in other lands, in the form of Merlin the Magician.

The knight searched the woods for months looking for Merlin, but without success. He was losing his hope and self-confidence when he finally found Merlin sitting in the woods, surrounded by animals of the forest. When the knight said that he had been looking for Merlin and was lost for months, Merlin corrected him saying “All your life” (that he has been lost). The knight responded that he hadn’t come all this way to be insulted, but Merlin commented that “Perhaps you have always taken the truth to be an insult.”

The knight was now upset and wanted to leave, but the weight of the armor had made him too weak to climb back on his horse and ride away. Merlin said that this was fortunate because “A person cannot run and also learn. He must stay in one place for a while.” Merlin then told the knight that he was not born with the armor and the reason he had put it on in the first place was because he was so afraid. The knight responded that he wore the armor for protection and “to prove that I was a good, kind, and loving knight.” “If you really were good, kind, and loving, why did you have to prove it?” Merlin asked. The knight then asked “Why do you always answer a question with another question?” to which Merlin replied “And why do you always seek the answers to your questions from others?”

Chapter 3 – The Path of Truth

Merlin sent the knight on his way down a new path, saying that “People are often unaware of the path they are on” and reminding him of his purpose: to get rid of his armor. This new path, the Path of Truth, looked narrow and steep to the knight, and although he wasn’t sure it was worth the climb, he knew he needed to try it. Merlin agreed, saying “Your decision to take an unknown trail while encumbered with heavy armor takes courage.” When Merlin mentioned that at the top of the Path there would be three castles blocking his way, the knight became excited, saying eagerly that “There will be a princess inside each castle, and I’ll slay the dragon guarding her and rescue –” But Merlin interrupted him, saying “There will be no princesses in any of these castles. You have to learn to save yourself first.”

Merlin continued. “The first castle is named Silence; the second, Knowledge; and the third, Will and Daring. Once you enter them, you will find your way out only after you have learned what you are there to learn.” The knight sensed that this journey was going to be much more difficult than a crusade and Merlin agreed, saying “There is a different battle to be fought on the Path of Truth. The fight will be learning to love yourself.”

Chapter 4 – The Castle of Silence

After many perils, the knight finds and enters The Castle of Silence, only to discover that the king of his home kingdom is there, working on his own self-discovery. The two have a long conversation, during which the king speaks words of wisdom such as: “One can’t really see until one understands.” “Most of us are trapped within our armor.” “Being quiet is more than not talking.” “Everybody understands crusades, but very few understand truth.” After the king departs, the knight spends (what turns out to be) a very long time in silence, contemplating who he is and how to find the hidden door (of enlightenment) that would lead him to the next part of his journey. Exhausted from the deep exploration of himself, the knight eventually falls into a deep sleep, awakening outside of the castle. It is there that he discovers that his helmet has fallen away!

Chapter 5 – The Castle of Knowledge

Back on the Path of Truth, the knight walks all day before coming to the Castle of Knowledge and finding an inscription on the wall, which read: Knowledge is the light by which you shall find your way. And then another that read: Have you mistaken need for love? As he sat a while and contemplated these readings, it dawned on him that he’d needed the love of his wife and son (and all of the damsels he had rescued) because he didn’t love himself. And if he didn’t love himself, he couldn’t really love others. As the knight admitted this to himself, Merlin the Magician appeared and told him that “You have discovered a great truth. You can love others only to the extent that you love yourself.”

The knight also came to understand that his ambition for becoming the best knight in the land might have led him astray. Merlin wondered aloud if the knight had been so busy trying to become, that he couldn’t enjoy just being. Merlin said that “Ambition that comes from the mind can get you [material riches]. However, only ambition that comes from the heart can also bring happiness.” When the knight pledged that, from that moment on, his ambition would come from the heart, he magically found himself back on the Path of Truth…and the armor on his arms and legs had fallen away.

Chapter 6 – The Castle of Will and Daring

The next day, the knight arrived at the drawbridge to the Castle of Will and Daring. When he was halfway across, a huge, fire-breathing dragon lumbered out who was aptly named the Dragon of Fear and Doubt. The knight was frightened, however, he recalled that Merlin once said that self-knowledge could kill the Dragon of Fear and Doubt, because self-knowledge is truth and truth is mightier than the sword. With his new-found knowledge that he was born good, kind, and loving, and that he didn’t need to prove anything to anyone, he realized that he didn’t have to feel fear and doubt. The dragon was only an illusion.

Mustering up all his courage, the knight marched toward the dragon, chanting to himself “Fear and doubt are illusions.” The dragon threw gigantic flames at the knight, but none set fire to him. The dragon became smaller and smaller until it was no bigger than a frog, and then began spitting small seeds at the knight. But these seeds – the Seeds of Doubt – didn’t stop the knight either. He had conquered the dragon who said in a small voice to the knight “I’ll be back again and again to stand in your way“…and then the dragon vanished. Self-knowledge had killed the Dragon of Fear and Doubt, and the knight thought that nothing could stop him now.

The Final Chapter – The Summit of Truth

To complete this part of his journey of self-discovery, the knight needed to climb over sharp rocks on his way to the Summit of Truth. Near the top and blocking his path, he found a huge boulder with an inscription chiseled on it: Though this universe I own, I possess not a thing, for I cannot know the unknown if to the known I cling. He was no longer certain of all of the things he thought he knew about himself: such as his identify, his beliefs, and his judgments. He did know that he was clinging to the jagged rocks, so to know the unknown, he felt that he needed to let go, even if the fall might kill him. Trusting in “life, the force, the universe, God – whatever you want to call it,” the knight let go and plunged down.

During his fall, the knight released his guilt, judgments, and excuses, accepting full responsibility for his life. And he was now unafraid. As an unfamiliar calm overtook him, he found himself rising back up and then standing on top of the mountain. “He’d let go of all that he’d feared and all he had known and possessed. His willingness to embrace the unknown had set him free. Now the universe was his to experience and enjoy.” He cried tears of joy which melted away the last of his armor. He smiled through the tears, unaware that a radiant, new light shone from him.