Book Summary: “The Five Temptations of a CEO” by Patrick Lencioni 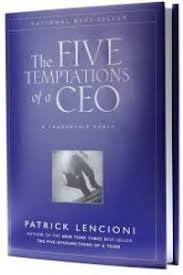 In this book by leadership guru Patrick Lencioni, the CEO of a San Francisco-based company is struggling in his first year at the helm. Unbeknownst to him, what is required is not a review of marketing, strategic planning, and finance. Rather, the situation requires the CEO to get out of his comfort zone for a behavioral self-examination; something that many business owners and executives can be very hesitant to do. Many CEOs don’t realized that their success as an executive usually has less to do with intellectual skills than it does with personal and behavioral discipline.

In this leadership fable, similar to Ebenezer Scrooge in Charles Dickens’ famous story A Christmas Carol, the CEO achieves profound enlightenment over the course of a subway ride after being visited by an odd but insightful fellow passenger. Whether real or a dream, the passenger opens the CEO’s eyes to some of his self-destructive behaviors and practices and imparts some useful business and behavioral insights along the way.

Labeled as “temptations,” the passenger discusses five areas where there is a natural tendency toward human frailty and where CEOs often go awry, resulting in CEOs being less effective leaders and in unsatisfactory business results.

Lencioni purports that a common temptation for many CEOs is that they become more interested in protecting their career status than making sure their company achieves results. Certainly, they can be proud of reaching personal milestones in their careers, but that shouldn’t trump actually doing something with their status. Achievement should drive them – not ego. A focus on their career and status will make the CEO complacent and unfocused, which causes results to slip. And, too often, CEOs justify their own performance even when the organizations they lead are failing around them.

Self-Assessment question: Would it bother you greatly if your company exceeded its objectives but you remained somewhat anonymous relative to your peers in the industry?

Whether done consciously or not, many CEOs prefer to be popular with their direct reports (and let them off the hook) instead of holding them accountable. It’s lonely at the top of an organization and wanting to be well liked is understandable – but it’s dangerous judging oneself too much by what other people think of you. What is required is for the CEO to tell her employees what is expected of them and then remind them of those expectations constantly. And when performance is not up to expected levels, the CEO needs to deal with it directly and professionally. People may not always like the CEO when difficult situations are dealt with in this manner, but they will respect them.

Many CEOs have the temptation to ensure that their decisions are correct. In choosing certainty over clarity, some CEOs fear being wrong so much that they wait until they’re absolutely certain about something before they make a decision. They don’t like to decide things without perfect information, so things hand there ambiguously. But if there is one person in the organization who cannot afford to be overly precise, it is the CEO. Three words which a CEO should get used to saying is “I was wrong” because if a CEO can’t get comfortable being wrong, then he won’t make tough decisions with limited information. You can’t move forward in the face of uncertainty if a CEO isn’t willing to make mistakes. Also, Lencioni writes that, in these situations, CEOs “can’t hold people accountable for things that aren’t clear. If you’re unwilling to make decisions with limited information, you can’t achieve clarity.” This, then, makes it impossible to hold people accountable. And without accountability, results are a matter of luck. So make clarity more important than accuracy.

Self-Assessment question: Do you pride yourself on being intellectually precise?

Temptation four is the desire for harmony. Lencioni writes that “It’s natural for human beings to want harmony. But harmony is like cancer to good decision making.” What’s needed to make good decisions is not bad conflict, but productive ideological conflict, with passionate, heated conversations where people challenge one another without any permanent damage to their relationships. But many CEOs are afraid to entertain conflict, to tolerate discord, and to put their own ideas on the line where they might be challenged. The outcome is that they don’t benefit from the various opinions and ideas of their people.

Self-Assessment question: Do you get uncomfortable at meetings if your direct reports argue?

CEOs must trust their employees, even when it feels like they are putting their careers in the hands of others. But before a CEO can trust others, she has to be vulnerable. People who trust one another aren’t worried about holding back their opinions or their passions. Getting results, holding people accountable, creating clarity for their people, engaging in productive conflict…these all depend ultimately on vulnerability and trust. CEOs must trust their employees and actively encourage them to challenge their ideas. They will return that trust with respect and honesty, and with a desire to be vulnerable among their peers.

Self-Assessment question: Do you try to keep your greatest weaknesses secret from your direct reports?

Having one or more of these temptations is not why CEOs ultimately fail. Lencioni writes that “Leaders fail because they are unwilling to put their temptations on the table for others to see.” But this calls for a level of scrutiny that many CEOs resent and resist. However, a willingness to do this is exactly what separates leaders who succeed from those who fail. “The key is to embrace the self-examination that reveals the temptations and to keep them in the open where they can be addressed.”

No one loves to admit being wrong, but some people hate it. Great CEOs don’t lose face in the slightest when they are wrong, because they know who they are, they know why they are the CEO, and they realize that the organization’s results, not the appearance of being smart, are their ultimate measure of success.