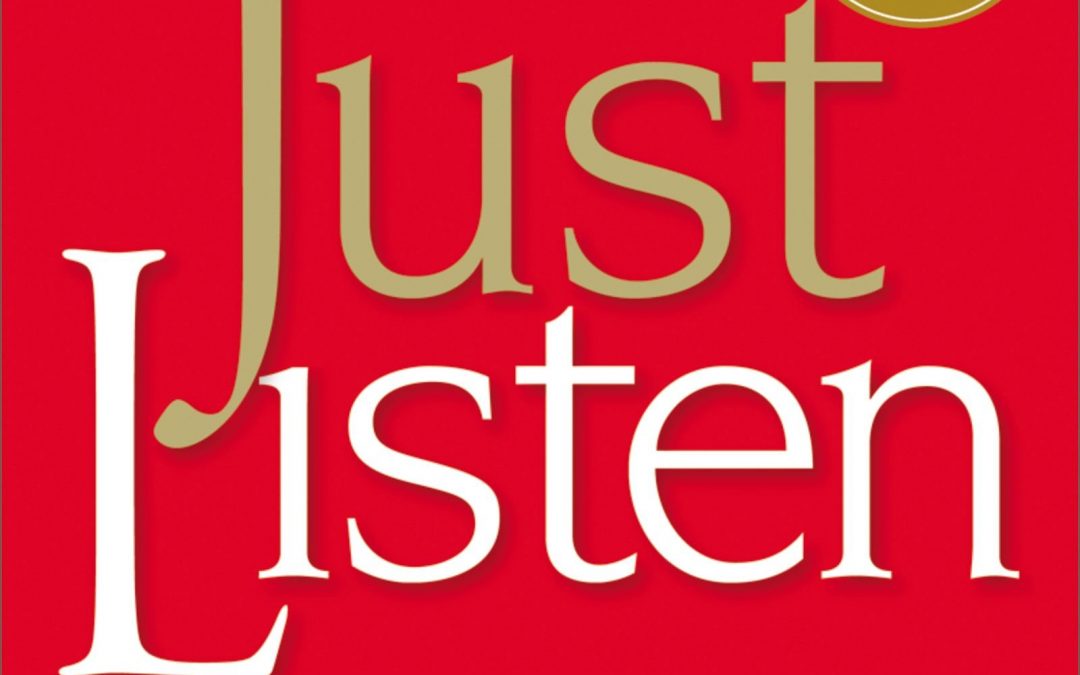 Goulston, a psychologist, consultant, author and frequent contributor on TV, has written an insightful and example-laden book that explores many facets of not “just” listening, but of effective communication, in general. Subtitled “Discover the Secret to Getting Through to Absolutely Anyone,” the author lays out nine core rules for getting through to anyone and then provides twelve quick and easy ways to achieve buy-in and get through.

As background, Goulston explains that all persuasion involves moving people through the steps of what he calls the “Persuasion Cycle:”

2.      From listening to considering

The tenet of the book is that you get through to people by having them “buy in,” which occurs when they move from “resisting” to “listening” to “considering” what you’re saying. And that the key to gaining “buy in” and then moving people through the rest of the cycle is not what you tell them, but what you get them to tell you – and what happens in their minds in the process.

1.      Move Yourself from “Oh F#@& to Ok” – Stress interferes with your ability to reach people, so get your emotions under control…quickly. Strive to move from your initial reaction (“Oh F#@&”) through the release (or realization) phase, through the recenter phase, the refocus phase, and finally to the reengage phase. When you do so, you go from being fixated on the way you are convinced the world should or shouldn’t be, but never will be, to being ready to deal with the world the way it is.

2.      Rewire Yourself to Listen – We tend to size up people instantly based on what we’ve heard about them or experienced first-hand. However, our first impressions and first impressions are a jumbled mix of truth, fiction and prejudice. We end up dealing with a fictitious creation, not the real person. If you want to open the lines of communication, open your own mind first to determine who they really are.

3.      Make the Other Person Feel “Felt” – This simply means putting yourself in the other person’s shoes. When you “get” each other, you can change the dynamics of a strained situation or relationship to cooperation, collaboration, and effective communication.

4.      Be More Interested than Interesting – To master the skill of being interested, and being sincere when you do it, stop thinking about a conversation as a tennis match where the goal is to score more points than your opponent. Instead, think of it as a detective game, in which your goal is to learn as much about the other person as you can. Ask questions that demonstrate that you want to learn more, e.g., that will cause them to say “I feel x, I think y, I did or would do z.”

5.      Make People Feel Valuable – People need to feel valuable; even (or possibly especially) the complainers, whiners, and obstructers. Both the good people in your life and the annoying people need and deserve reassurance that they matter. Do so, and they’ll give you what you need. Everyone competes for time, but no one should need to compete for importance.

6.      Help People to Exhale Emotionally and Mentally – Stress isn’t bad. It causes us to focus, become determined, and test our mettle. It’s when stress crosses over to distress that problems result. Even though it can be very difficult, allow people to vent and get as much off of their chest as they feel is possible, without you interrupting or being judgmental. The saying goes to “Forget the music. If you want to soothe the savage beast, get the beast to exhale.”

7.      Check Your Dissonance at the Door – Dissonance occurs when you think you’re coming across in one way but people see you in a totally different way. For example, you think you’re confident, energetic, and passionate, but others see you as arrogant, hyper, and impulsive. It also occurs when you think you perceive someone else accurately, but the other person doesn’t agree. So how can you know how others perceive you? Ask your friends, relatives and coworkers.

8.      When All Seems Lost, Bare Your Neck – When you’re cornered and feel like baring your teeth, instead reach deeper, feel your fear, face up to your deficiencies and tell others that you’ll do your best to reform. As Keith Ferrazzi says, “Don’t be afraid of sharing your vulnerabilities. Vulnerability doesn’t make you weak, it makes you accessible.”

9.      Steer Clear of Toxic People – Strip people who want to con you, bully you, thwart you, or make you a scapegoat for their mistakes, of the power to hurt you. Goulston writes that “If you’re hesitant to say “No,” you may be neurotic. If you’re truly afraid to say “No,” you’re probably dealing with a toxic person. And if nobody ever say’s “No” to you, that toxic person could be you.”

1.      The Impossibility Question (or “kicking but”): You ask “What’s something that would be impossible to do, but if you could do it, would dramatically increase your success.” Then after they respond, you ask “What would make it possible?”

2.      The Magic Paradox: When you help spell out a person’s reasons for being negative or disagreeing, you shift them into a more positive attitude and agreeing.

3.      The Empathy Jolt: When two people are beating on each other instead of communicating, or a person is more interested in attacking than in listening, insert a jolt of empathy. The author writes that “anger and empathy can’t exist in the same place at the same time,” so be curious and strive to understand what challenges they’re dealing with.

4.      The Reverse Play, Empathy Jolt #2: Use this if you’re dealing with someone who has the skills and ability to do the job, but isn’t giving it 100 percent. But instead of criticizing and laying out where they’re falling short, mention some reasons why you might be disappointing them. By doing the unexpected and apologizing yourself, the other person will shift out of defensive mode and tend to mirror your humility and concern. “An ounce of apology is worth a pound of resentment.”

5.      Ask “Do Your Really Believe That?”: Before you worry about solving someone else’s problem, find out if there really is a problem.

6.      The Power of “Hmmm…”: Respond to someone who is mad and defensive with something neutral like “Hmmm” or “Tell me more” or “Really?” or “Then what happened” or “What else can you tell me?” Don’t get defensive; go deeper.

7.      The Stipulation Gambit: Instead of hiding a weakness or problem, neutralize it. Show poise by openly expressing the misgivings people have about you, and they’ll be more likely to give you their positive and undivided attention.

8.      From Transaction to Transformation: Transactional communications don’t create traction in a relationship because they’re impersonal and shallow. So we need to move beyond transacting to relating by asking questions that let the other person tell you: “This is what I think,” “This is who I am,” “This is what I want to achieve,” or “This is how you can play a part in making my life better.” Endeavor with this “eyes-to-the-sky” technique to get others to look up and reflect.

9.      Side by Side: Ask questions during a shared moment and then deepen the conversation with more questions (forming the core of the Socratic Method). This technique is based on three facts: 1) sitting people down and lecturing them rarely works, because it makes them defensive and to hide things from you; 2) questioning works better than telling; and 3) when you allow one revelation to lead to another without getting in the way, you learn even more.

10.  Fill In the Blanks: Invite people into a conversation with fill-in-the-blanks approach rather than asking questions that put them on the defensive. Direct questions make people think you’re talking at them. Let them fill in the blanks, and they’ll feel you’re talking with them.

11.  Take It All the Way to “No”: Keep pushing for what you want until you receive a “no.” Then get them to move from “no” to “yes” by saying something like “I either pushed too hard or failed to address something that was important to you, didn’t I?” Then use the fill-in-the-blanks or other effective questioning approach to build on the moment.

12.  The Power Thank You and Power Apology:  Use a Power Thank You when an ordinary “thanks” won’t do; it has 3 parts: 1) reference something specific the person did for you; 2) acknowledge the effort it took them; and 3) tell them the difference that his or her act personally made to you. Whereas the Power Apology, when warranted, consists of the 4 R’s: Remorse, Restitution, Rehabilitation, and Requesting forgiveness.

One key to reaching people is to be reachable yourself. I’d love to hear from you regarding this book and any feedback you have as you give some of these concepts and techniques a try.