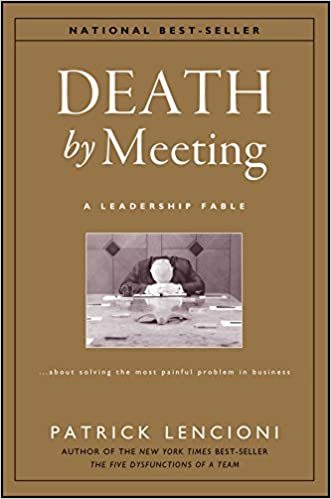 The book’s subtitle is “A Leadership Fable” and it tells the story of a talented and fairly successful CEO who also runs terribly ineffective meetings, negatively impacting the business’ performance and results. Lencioni, best-selling author of “The Five Dysfunctions of a Team,” doesn’t mince words about meetings, writing that “Bad meetings, and what they indicate and provoke in an organization, generate real human suffering in the form of anger, lethargy, and cynicism.” That’s a strong statement…but accurate from my experience. (How often have you thought or said “Wow, that was an awesome meeting!”?)

Likely far fewer than the number of times you have thought “That meeting was…” (fill in the blank: so awful, so boring, such a waste of time, etc.).

Meetings are frequently the antithesis of the compelling, productive, and fun activities that they need to be and should be, and the author contends that “bad meetings start with the attitudes and approaches of the people who lead and take part in them.” To begin to make improvements we must understand that the real problem with meetings is two-fold: they are boring and they are ineffective.

First, meetings are boring because they lack drama, or conflict (the one element that is required to make any human activity interesting). Most leaders of meetings tend to focus on avoiding tension, strictly following the agenda (if there is one), and ending on time. Constructive conflict occurs only when subjects of impact are addressed and debated, allowing for varying opinions and perspectives to be expressed. A meeting leader must seek out and uncover any important issues about which the team members do not agree. Unless there is conflict and drama, the topics that are most important cannot effectively be evaluated. Employees are looking for a reason to care and the meeting leader needs to provide that. Lencioni writes that “the only thing more painful than confronting an uncomfortable topic is pretending it doesn’t exist.” How true!

Second, meetings are ineffective because they lack “contextual structure.” Like a bad stew with too many random ingredients, every topic imaginable is typically fair-game for weekly staff meetings (for example). So with no clarity around what topics are appropriate to cover, there is no clear context for the various discussions that take place. Ineffective and unsatisfying meetings result. In the end, the author writes, “little is decided because participants have a hard time figuring out whether they’re supposed to be debating, voting, brainstorming, weighing in, or just listening.” To combat this, he recommends that the following “Four Meeting” structure be instituted around team meetings:

We typically complain about how much time we spend in meetings, but the real issue is that the meetings normally aren’t very effective. When properly utilized, meetings can actually be time savers.

Bottom Line: For those organizations that can make the leap from painful meetings to productive ones, the rewards are enormous. Higher morale, faster and better decisions, and inevitably, greater results.