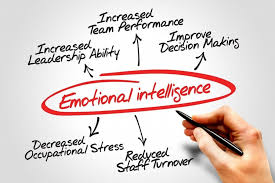 The term “emotional intelligence” (EI) was coined in the early 1980s but Daniel Goleman popularized the concept in the late 1990s, focusing on workplace application. In his ground-breaking book Emotional Intelligence, Goleman posited that 90% of the difference between star performers and average performers in the workplace was related to EQ.

Research also shows that successful leaders and superior performers have well-developed emotional intelligence skills. This makes it possible for them to work well with a wide variety of people and to respond effectively to rapidly changing conditions in the business world. In fact, a person’s EQ is likely a better predictor of performance and success than intelligence (as measured by “intelligence quotient” or IQ).

EQ skills aren’t conﬁned to performance and success at work, though – they carry over into nearly every aspect of life; capturing the entirety of who YOU are as an individual and having a tremendous impact on your overall well-being. Luckily, EQ isn’t a “you have it, or you don’t” type of characteristic; rather, it’s a set of skills that can be learned and continually improved.

Delving deeper into the subject, it is important to understand that there are five (5) dimensions of emotional intelligence. They are:

One of the tools that we frequently use with our clients is TTI Success Insights’ Emotional Quotient assessment. This assessment evaluates a person’s level of emotional intelligence across the five dimensions listed above and provides insights into which areas to focus on to raise one’s EQ plus some suggestions for doing so.

Emotional intelligence is an area you can focus on and develop, regardless of your current level of acumen in each dimension. There are many ways to work on your emotional skills, but the important thing to remember is that it takes patience and practice, because these aren’t skills that you can develop overnight.

Emotional Intelligence is arguably the singular competency that can help both employees and employers get out of a funk faster. EQ has never been more relevant in the workplace than it is now and will continue to be in the coming years…and the ability to recognize and regulate emotions and harness them for high performance will be paramount.

While we can expect our understanding of emotional intelligence to continue to evolve as it is studied, EQ is here to stay. It continues to gain significant prominence in both academia and the corporate world. There is reason to believe that, unlike so many other concepts in the human capital space that have come and gone, EQ is growing in acceptance and practice.