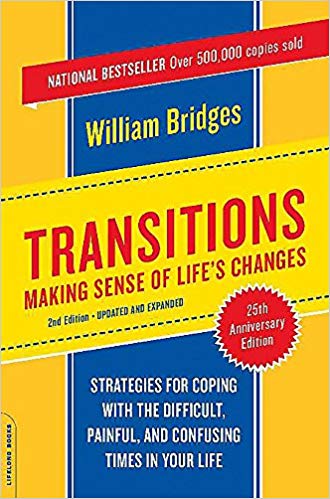 I appreciate the saying by the great American philosopher and poet Ralph Waldo Emerson that “Not in his goals but in his transitions man is great.” So, I was excited when my friend Derek Noether suggested the book Transitions, because we all deal with many changes in our lives but I was interested to learn more about putting them into a broader context.

In Transitions. Making Sense of Life’s Changes, Bridges first clarifies the distinction between change and transition, stating that our society confuses them constantly. He writes that change is one’s move to a new city, their shift to a new job, the birth of a baby, or the death of a loved one. In other words, change is situational. Transition, on the other hand, is psychological. It is the personal side of change; the inner-reorientation and self-definition that a person has to go through in order to incorporate any of those changes into their life.

One of the most important differences between a change and a transition is that changes are driven to reach a goal, but transitions start with letting go of what no longer fits or is no longer adequate to the life (or work) stage you are in. Writing that transitions are the natural process of disorientation and reorientation marking the turning points in the path of growth, the author believes that, unless transition happens, change won’t work, because it doesn’t “take.”

Many people likely feel that change is a constant occurrence (or state); with some change of our own doing and other times being thrust upon us. Categories of common changes include losses of relationships, changes in home life, personal changes, work and financial changes, and inner changes. In Future Shock, Alvin Toffler wrote that “Change is avalanching upon our heads and most people are grotesquely unprepared to cope with it.” And it’s often not merely the amount or frequency of change that we deal with, but also the pace of change that can leave us disoriented. Bridges contends that change can be more endurable if it means something – if it is part of a movement toward a desired end. But that if it is not related to some larger and beneficial pattern, it simply becomes distressing.

The author writes that, in work life, an extremely high level of change is likely to keep one’s career in a semi-permanent state of transition. Reorganizations, mergers, technological changes, strategic shifts, new initiatives, and new products/services can ensure that most organizations are in a constant state of turmoil. Since we have a change-dependent economy and a culture that celebrates creativity and innovation, there is little chance that our careers won’t be punctuated by frequent changes. And there is little chance that these transitions won’t take a significant toll on our productivity and output as we siphon off energy and time to adjust. Organizational changes not handled well can result in significant reduced productivity, absenteeism, increased defects, and employee turnover.

Bridges describes that all transition processes are composed of three phases:

Bridges writes that genuine transitions begin with us, even when the change may be initiated by external forces or factors. And he mentions things that can be done (at the right time) to move the process forward, such as to: stop getting ready and start acting; visualize the desired end-result (goal); shift your purpose from the goal to the process of reaching the goal; take things step by step; and accept that things will probably not go as smoothly as you would like.

As an aside, this book reminds me of an article regarding organizational change entitled “Managing Change” by Kate Nelson, circa 2008. In the article, Nelson lists these 8 truths about change:

Although Bridges’ book focuses primarily on personal transitions, I believe that many of his insights and suggestions are extremely relevant to business / organizational transitions, as evidenced by Kate Nelson’s list above. I took from the book as much for dealing with changes in business as I did for dealing with them at the personal level – and I hope that you find this book summary to be of value.