Book Summary: “Execution. The Discipline of Getting Things Done.” by Bossidy, Charan 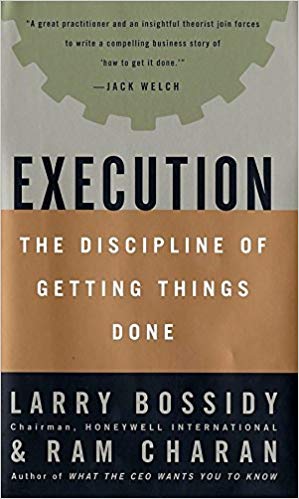 Being a long-time GE employee (albeit from more than 15 years ago), I was interested to dig into this book, as it has been on my reading list for a while. It’s all about execution…and, as the authors discuss at length, I too have seen many terrific visions, plans, and opportunities go unfulfilled due to a lack of effective execution.

The objective of “Execution: the discipline of getting things done” is to dispel some myths or inaccurate thinking regarding execution, and to provide some concepts and tools to improve outcomes. Execution is not something that just does or doesn’t get done. Execution is a specific set of behaviors and techniques that companies need to master in order to have competitive advantage. It is a discipline of its own.

What follows is a summary of some of the key points that I took away from this book.

Many well-known and even presumably “good” companies, with smart CEOs, inspiring visions, and talented employees, regularly fail to produce promised results. When companies fail to deliver on their promises, the most frequent explanation is that the CEO’s strategy was wrong. But the strategy by itself is not often the cause. Strategies most often fail because they aren’t executed well. Things that are supposed to happen don’t happen. Either the organizations aren’t capable of making them happen, or the leaders of the business misjudge the challenges their companies face, or both. The gap between promises and results is the gap between what a company’s leadership wants to achieve and the ability of the organization to achieve it. Execution is the missing link and, as such, should be the major job of a business leader.

The authors contend that leaders place too much emphasis on higher-level strategizing, intellectualizing or philosophizing, and not enough on implementation. That a fundamental problem is too many people thinking of execution as the tactical side of business, something that leaders delegate to others while they focus on the perceived “bigger” issues. Execution has to be a part of a company’s strategy and its goals. No worthwhile strategy can be planned without taking into account the organization’s ability to execute it.

Execution is often thought about as doing things more effectively, more carefully, or with more attention to the details. To understand execution, you have to keep three key points in mind:

Most companies don’t face reality very well and, in its most fundamental sense, execution is a systematic way of exposing reality and acting on it.

The core processes are tightly linked together and need to be connected to the everyday realities of the business by creating a discipline of execution around:

The leader must be in charge of getting things done by running the three core processes: 1) by picking other leaders, 2) setting the strategic direction, and 3) conducting operations. Businesses that execute prosecute these core processes with rigor, intensity, and depth. But leading for execution is not about micromanaging or being “hands on,” it’s about active involvement and doing the things that leaders should be doing.

Let’s explore some of the key elements of these core processes:

If you have leaders with the right behavior, a culture that rewards execution, and a consistent system for getting the right people in the right jobs, the foundation is in place for operating and managing each of the core processes effectively.

For leaders who are in charge of execution, the authors suggest these seven essential behaviors:

As Jack Welch quotes in this book, “A great practitioner (Bossidy) and an insightful theorist (Charan) join forces to write a compelling business story of ‘how to get it done.’”

I hope this book summary helps in your endeavors to fulfill your visions, plans, and dreams.